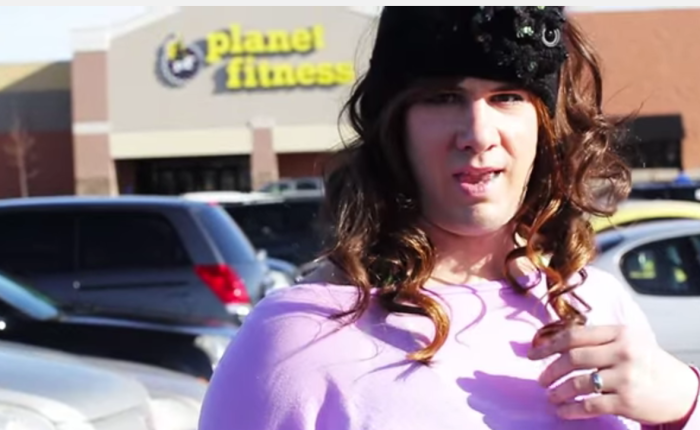 Steven Crowder, the host of Blaze TV’s Louder With Crowder, has come out of the closet.

Over the years, as part of his broadcast, Crowder has appeared at numerous college campuses challenging liberals to change his mind on subjects they may feel strongly about, such as multiple genders, and racism, to dressing as a woman to mock transgenders.

Crowder has been a vocal opponent of the LGBT community and has often ridiculed gay and transgender people on his YouTube channel. Recently he ran into controversy when he was accused of targeting Vox’s Carlos Maza for harassment, allegedly calling him a ‘lispy queer’ and numerous other insults, for which his channel was temporarily demonetised. Conservatives – including Crowder himself – immediately cried foul, claiming he was being singled out for censorship – even though he was not actually censored – simply because he’s conservative and conservatives can never get a fair break from the oppressive liberal media, which apparently extends to private social media platforms.

In a recent interview with the Journal, Crowder admitted to being a closet queer for years, and that wearing a dress to mock liberals helped him to realize the truth.

“I was afraid to admit what was painfully obvious,” he said. “That I’m gay. I like men. For years, here I was mocking liberals, making fun of lesbians and queers, and making a complete ass and a fool of myself by dressing like a woman to mock transgender people. But I really wasn’t fooling anybody. The only one I was fooling, was myself. And when I say I wasn’t fooling anybody, I mean I wasn’t fooling anybody who knew the real me, and the real me was a gay dude in a stud muffin of a body dying to get out, I just didn’t know it at the time.

“I wasn’t fooling my critics,” he continued. “The things they say about people who are obsessed with suppressing gay rights, like they’re really closet queers themselves, are true. I can’t speak for anybody else, but I can speak for me, and while I’ve never tried to deny gays their rights, I certainly did deny them their dignity by mocking and making fun of them.

“I was clearly a closet queer, and like I said, it was painfully obvious to almost everyone but me. Every time I put on dress and made a fool of myself, I thought I was being cool and clever and funny, and I couldn’t wait to confront some queers or trannies and make fun of them by pretending to be one of them. But I have to be honest and admit that I was also hoping that men would whistle at me and hit on me, because I always thought I looked sexy in a dress and a wig, and made one hot chick. I mean, I’ve always thought of myself as a stud muffin of a guy, so why wouldn’t I also be a stud muffin magnet in drag? But it never happened. Guys avoided me like the plague or something. Even the wimpiest, and the ugliest looking dudes, who looked like they would settle for getting laid by a cheap blow up doll, rather than a woman who wouldn’t give them the time of day, wouldn’t give me the time of day! Of course, it could have been because of the five o’ clock shadow, the hairy chest and legs. But those reasons never even occurred to me at the time.

“My brother, Jordan, and some of my closest buddies, said it was definitely the beard stubble, the hairy chest, and legs that guys found me so unappealing. They also told me I was literally the ugliest chick that they had ever seen, and shaving all of my body hair wouldn’t improve my chances of getting hit on.

“I remember thinking, what do those losers know about girls? I was a Goddess in drag, even with the stubble, the hairy legs and chest. They were all such f**king pathetic losers that none of them had ever had a girlfriend the entire time I’d known them, not even my little brother, who was always a momma’s boy. I was the only one that ever had a girlfriend. They were so pathetic that they couldn’t get laid by the ugliest chick on Earth if their f**king pathetic lives depended on it.

“One morning I was getting ready to go out and mock some queers at a gay pride parade or something, which I planned to film and later upload to my YouTube channel. I was applying some eye shadow in the mirror, when all of a sudden it hit me.

“I wasn’t dressing in drag all these years just to mock queers and lesbians. I wasn’t embarrassing and humiliating myself dressing like a woman to interview muscular stud muffins drenched in sweat and body oil with massive bulges in their shorts, making me wonder what they looked like with those shorts off, as I sweated uncontrollably with a massive bulge of my own, and couldn’t wait to go home and beat off frantically with the images still fresh in my mind, just to prove I hated gays.

“No, something else was going on here.

“I was actually gay!

“That song by the Pointer Sisters, I’m So Excited, started playing in my head, and I felt a stirring in my groin.

“I also realized something else. I wasn’t just gay.

“I was also a woman!

“A woman in the body of a stud muffin that women couldn’t keep their hands off!

“A woman who was dying to get out, yearning to be free! Like all the women in those Stay Free maxi pad commercials!

“Why else would I feel so comfortable and sexy in a dress? I mean, it should have been obvious from that first time I tried on some of my mother’s dresses, panties, and make up when I was twelve.

“Once, during those few times I had tried on some of my mother’s clothes, she had caught me staring at myself in the mirror, and said, “You should have been born a girl, Steven.” I nearly had a heart attack and died of embarrassment.

“Don’t worry, she told me later, I won’t tell anyone. Years after that embarrassing incident, my father told me during a fishing trip with Jordan and me, that mom had always wanted a daughter. I remember him being drunk at the time, and I wasn’t sure if he was being serious or not.

“Oh my God, I thought continuing to stare at myself in the mirror, I’m now the daughter that mom never had!

“It was kind of creepy. But not as creepy as the time mom had caught me wearing her clothes.

“I still wanted to be a woman. But to be a woman , I had to do more than just dress like one and act like one. I had to become one, and that could only mean one thing. So, after a lot of soul searching and a lot of reading on the subject, I decided to go ahead and do it.

“That was last year. I waited a while before telling anyone. When they got over the shock, Dad was disappointed, but mom was thrilled. She bought me a lifetime’s worth of dresses and dolls, and wanted to have tea parties with me for all times I missed out as a kid.

“Jordan thought it was amusing, especially the dolls and the tea parties. During one of his laughing fits, I put him in a head lock and said if he told anybody, I would tell everyone he knew that he had been beaten up by a girl.

“Heidi was the only one I didn’t tell. She would find out eventually, on her own. By then it will have become obvious, if you known what I mean, and until then I plan to keep living a double life doing Louder With Crowder as Steven Crowder, while living a secret public life as Stephanie Crowder, the daughter my mother never had.”

Crowder says he eventually plans to write a book about his experiences as a liberated gay, bisexual woman, tentatively titled, Much Louder As Stephanie Crowder, or I Am Stephanie, Hear Me Roar!