Does Mark Levin have any self awareness?

Recently Levin was triggered by George Conway appearing on CNN to criticize Trump. Levin made the mistake of comparing Conway with Martha Mitchell – the wife of former convicted AG to Richard Nixon , John Mitchell – for which he got obliterated.

It is Levin who is shameless and shameful in his pathetic defense of this president.

“Barack Obama is to blame”: 13 Alabama conservatives on Charlottesville. http://google.com/newsstand/s/CBIwu7r28zk

Here we have a bunch of southern conservatives who have drunk the conservative media kool-aid. These people have been watching Fox News 24/7. It’s not the Neo-Nazis who were responsible for the violence on Saturday , but former president Barack Obama , George Soros , and Black Lives Matter. Apparently , to these idiots , Obama , Soros , and Black Lives Matter , may as well have been driving the car that plowed into the counter protesters , killing Heather Heyer , and injuring nineteen others , not the POS that was actually driving the car , because they all know that none of this would have happened if Obama hadn’t been racially divisive in his rhetoric ( he wasn’t , these idiots couldn’t even provide one example where he was ) , George Soros wasn’t funding every left wing project , and Black Lives Matter wasn’t an anti-white hate group that wanted to kill white people , cops , and burn down American cities.

Everything is Obama’s fault in Republicanville. 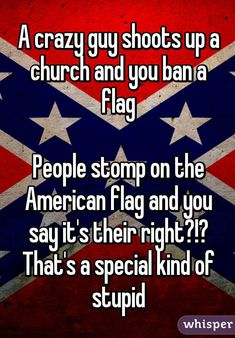 A special kind of stupid is the breed of Conservative who still believes that Dylann Roof shooting nine black people in a Charleston S.C. church , had nothing to do with racism – even though he admitted that his motive was racial – and that the confederate battle flag represents an army that fought for “states rights.” Who believes it only represents southern heritage , or southern pride.

We live in an age where information is easily accessible via the internet. Anyone who is interested in the history of the confederate flag , and it’s connection to the civil war , would discover that it had very little to do with states rights , other than the right to own other human beings as slaves. Defenders of the flag often claim that the civil war was not fought over slavery , but states rights , or tariffs. The Confederate States of America , in the Mississippi declaration , states that the  number one reason for secession from the Union was the opposition to the abolition to slavery. Every other declaration of secession makes the same argument , the importance of protecting the institution of slavery. It’s not a debatable issue.

They are a privileged lot. They live in a country where the majority of its population is Christian , that allows their religious symbols , holiday displays , and television shows , to the exclusion of all other religions. And yet , with all this freedom , today’s Conservative Christians are a persecuted minority. They’re persecuted because liberal bullies and the LGBT are pushing back , not tolerating their intolerance. Liberals and LGBT groups and individuals have become the intolerant ones. Never mind that the most radical Conservatives want to outlaw what consenting adults do in the privacy of their own bedrooms , have used violence and intimidation in the past and present against LGBT groups and individuals , have successfully pushed and gotten religious freedom laws passed , and are using these laws based on religion to portray themselves as the real victims of discrimination. No , it’s the individuals and groups who are seeking equality , and tolerance who are the bigots , filled with hate , who are discriminating.

Not all Conservatives willingly play the victim card. Just the most extreme radicals  who read this bullshit and believe it , and Liberal Logic 101 willingly caters to the most radical , bigoted , and racist individuals on the right. But there are plenty of Conservatives who know what these two flags represent. They know that the rainbow flag represents diversity among a group of individuals with diverse religious and political views ,  and the confederate flag represents centuries of slavery , Jim Crow , and racism. Anyone who claims otherwise , is ignorant of American history.

There is no shortage of stupid memes on the internet. Some of them come from liberal sources , but the worst of them come from Conservative sites like Liberal Logic 101. They are almost consistent in their stupidity. They claim to expose the stupidity and hypocrisy of liberals  , but all they really do is make themselves look hypocritical and foolish.

As an example of how idiotic their memes are  , this one takes first prize for stupidity and hypocrisy.

To anyone with a rational mind  , it seems like a reasonable suggestion. But Conservatives , and especially the buffoons at Liberal Logic , are anything but rational. They can only see the world in black and white. There is no nuance. In their minds , this is using the government to force the gay lifestyle ( same-sex marriage – “fictional rights” ) on everyone else , forcing them to participate and celebrate their lifestyle choices , as if someone were holding a gun to their heads , telling them they must get out in the streets and participate in gay pride parades. Yeah , that’s totally happening.

Gay rights advocates are supposedly using the government – Conservatives claim they’re for small government – to force their morality on others , but they see no problem with wanting the same government to defund organizations like Planned Parenthood.

As a non gay person ,  I have never felt pressured , nor have I ever been forced to participate in or celebrate the gay lifestyle. It’s just another lame excuse anti-gay bigots use to defend their bigotry. To believe that same-sex marriage is a threat to your lifestyle , or your particular definition of marriage , you have to be missing a few brain cells. 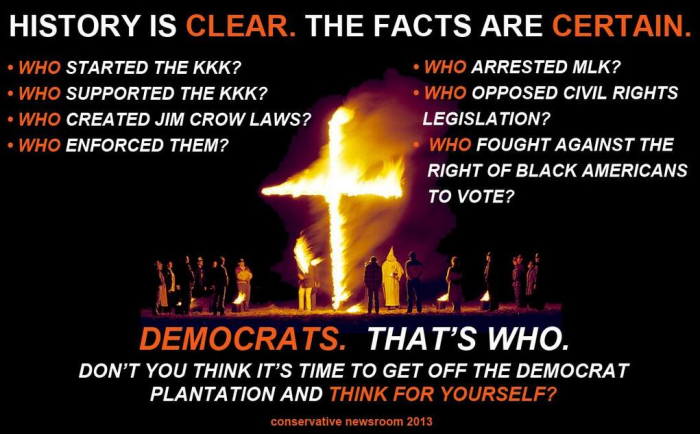 History and facts are not clear to Conservative Republicans.

It doesn’t matter that a few Democrats may have started KKK. What matters now is that the two parties are not the same as they were sixties years ago , a hundred years ago. Conservative Republicans don’t get this simple fact , or choose to ignore it.

Who supports the ideology of the KKK today? Conservative Republicans , not Democrats.

Who opposes civil rights for LGBT individuals today? Conservative Republicans , just as they opposed interracial marriage , and desegregation in the fifties and sixties when they were Conservative Democrats.

Who opposes the right of a woman to have an abortion? Conservative Republicans.

Who is fighting today against the right of black Americans and other minorities to vote , by supporting voter ID laws? Sound familiar? It sure as hell isn’t Democrats.

Who opposes social safety nets , such as welfare , and food stamps? Conservative Republicans , not Democrats.

Conservatives , don’t you think it’s time to stop pretending your party is the party of freedom  , liberty , and civil rights?

How those with common sense respond to gun violence : “What’s your plan to end gun violence?”

How idiots respond : “Duh , more guns , and shooting back is a place to start.”

People with common sense would call for sensible reform , but gun nuts oppose universal background checks , high capacity magazine , and assault weapons bans. They believe any form of gun control is a threat to their second amendment freedom.

For the past eight years  after a shooting , gun nuts repeated the same absurd arguments : ‘Now is not the time to talk about gun violence ; more guns will make us safer ; a good guy with a gun will always stop a bad guy with a gun ; guns free zones attract more gun violence ; and the most absurd claim : ‘Obama is coming for our guns.’ And each year those arguments were proven wrong. Obama never took their guns away , like they said he would.

I can imagine the idiots who read this nonsense , nodding their heads in agreement , ‘Yeah , more firearms , and more violence will put an end to gun violence. Stupid liberals.’