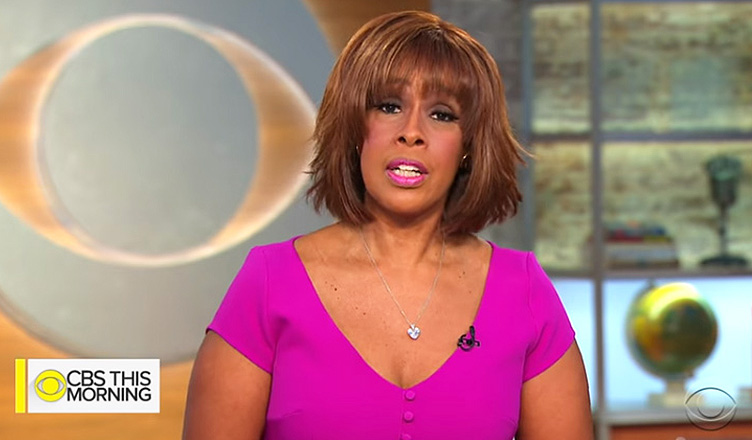 After the final debate between president Trump and Joe Biden, CBS This Morning’s Gayle King said she was flabbergasted that the president had referred to himself as ‘the least racist person in the room.’

King said she was particularly struck by Trump saying he was the ‘least racist person in the room’ and said she wondered ‘who else was in the room.’

“When you’re a kid your mom always tells you that actions speak louder than words,” she told her co-hosts. “When you look at the president’s actions, the last debate, it was a clear dog whistle, many people believe, to the Proud Boys, to stand back and stand by.


“( I couldn’t believe what I was hearing. At first I thought I had suddenly gone deaf, you know, as a side effect of all of the brazen lies he’s told, and when I discovered I could still hear, then I fell out of my chair because I was laughing so hard. The cameraman was staring at me. The director hurried out of the control room and asked me if I was alright. I told him yes, I was fine. I told him I was laughing because I couldn’t believe Trump had called himself the least racist person, when for years he’s been a shameless Birther, and has called Black Lives Matter and Antifa terrorists. I was also laughing because he called Obama the real racist because he was critical of law enforcement and once called a cop stupid, and had said that Trayvon Martin could have been his son.

“But even that wasn’t what I found particularly hilarious. It was when he said he has done more for black people than any other president since Abraham Lincoln. Does he really believe his own bulls***? I mean, come on, even president Obama never made such a claim. When he said that, I had this mental image of him dressed like Abraham Lincoln, and I wondered, where is his head at? Is it so far up his own rear end that he can’t see reality )?”


“I don’t think it’ll fit,” Norah O’Donnell said. “There are quite a few heads already jammed up there!”