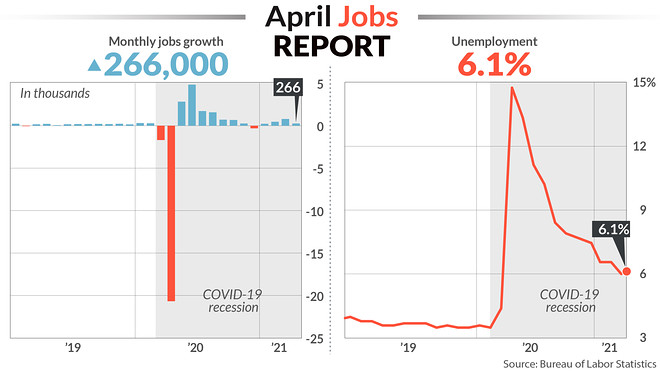 According to the Labor Department 266,000 jobs were added to the economy in the month of April, way less than the number expected by economic experts. Estimates from Dow Jones had been as high as one million with an unemployment rate at 5.8%.

“I think this is just as much about a shortage in labor supply as it is about a shortage of labor demand,” Jason Furman said, who is an economist at Harvard University. “If you look at April , it appears that there were about 1.1 unemployed workers for every job opening. So, there are a lot of jobs out there, there is just still not a lot of labor supply.”

Leisure and hospitality saw some of the highest gains, hiring 331,000, even though it was still short of the 2.9 million as it was before the pandemic tanked the economy.

Household employment was up by 328,000, still much lower than it was in February 2020. The participation rate in labor force rose from 0.2 to 6.1%, better than its previous level from August. The employment-to-population rate increased to 57.9%.

Justin Wolfers, who is a Senior Fellow at Peterson Institute for Internation Economics, said on Twitter that the report is “disappointing at a moment in which forecasters expected + 1 million jobs, and we’re still missing millions of pandemic jobs. This is a big miss that changes how we think about the economy.”