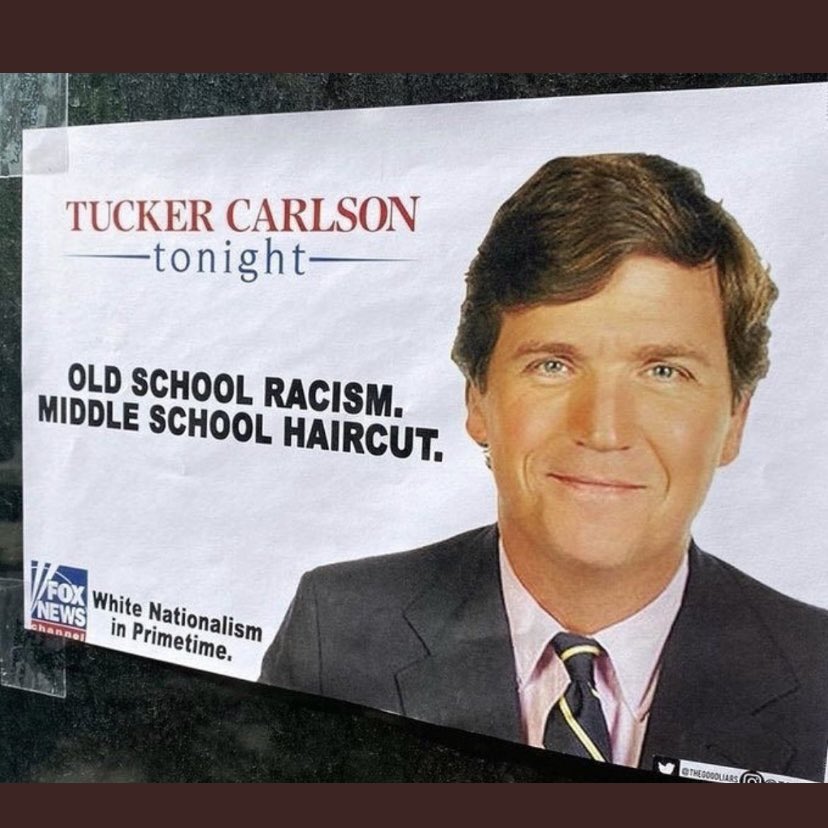 If you’re familiar with Smucker Carlson and can admit that he is America’s premiere propagandist, conspiracy theorist, and race baiter, then you’re among the sane. On the other hand, if you believe everything he says is written in stone… well, you’re exactly the type of person he hopes is enough of a sucker to keep him relevant. And there are plenty of people who fall into that latter category.

From the January 22 edition of Tucker Carlson Tonight.

Let’s pause for a moment to savor the sweet irony. Why would the “race lady” as he has referred to Reid, accuse Smucker of race baiting? Why would anybody in their right mind accuse Smucker of race baiting? It’s absurd! It’s ridiculous! Smucker loves people of all races. He just believes undocumented immigrants are “plundering the U.S. and want to steal America’s wealth”:

That immigrants make the U.S. poorer and dirtier:

That undocumented immigrants are polluting the Potomac and all of America:

That the Democrats want to deliberately change the demographics of America with undocumented immigrants in order to vote for them:

“I know the left and all the little gatekeepers on Twitter become literally hysterical if you use the term “replacement,” if you suggest that the Democratic party is trying to replace the current electorate ( he means white voter ), the voters now casting ballots, with new people, more obedient voters from the third world. But they become hysterical because that’s what’s happening actually. Let’s just say it: That’s true ( instead of something he made up )… if you change the population, you dilute the political power of the people who live there. So, every time they import a new voter, I become disenfranchised as a current voter ( ??? ). I don’t understand why everyone wants to make a racial issue out of it. You know, the white replacement theory? No, no, no, this is a voting rights issue. I have less political power because  they’re importing a brand new electorate ( ??? ).”

When Smucker tells his audience that immigration will be the death of western civilization, that the Democratic party has “an open border” policy, that their intent is to import millions of illegals to gain a new electorate, he’s just giving them the cold hard facts that everyone else – including him – are not allowed to talk about. They’re trying to silence and censor him, and anybody else who is brave enough to tell the truth… and yet, somehow they never do get censored or silenced, but that doesn’t stop them from bitching and moaning about it non-stop.

When Smucker told Alex Jones in 2015 when speaking of Obama, who never categorized anyone by race “they categorize people by race in a way that, you know, you can’t even imagine – 30 years ago you would have said, ‘Wait a second, that sounds like Nazi stuff.’ It’s not Smucker who is actually categorizing people by race… it’s his critics. Why would anyone dare accuse him of making anything about race? It was Obama who made everything about race simply for having the audacity of being a black president.

When Smucker told his audience in 2019 – after the El Paso, Texas shooter, Patrick Crusius wrote in a manifesto that his motivation was “in response to the Hispanic invasion of Texas” – that the shooting had nothing to do with “invasion” rhetoric from the likes of Smucker himself and that White supremacy was a hoax and a conspiracy theory perpetrated by the Democrats and the “liberal media” to keep a hold on political power… well, again, he was just saying what everybody was thinking, but we’re afraid to say out loud, because liberals have a strangle-hold on the media, academics, the courts, and every institution in America, and are censoring and cancelling all conservative opinion and thought.

When Reid – or anyone else – accuses Smuckers of harboring racist thoughts, it’s not projection. It’s  common sense. She doesn’t have to make up absurd conspiracy theories about Democrats opening hundreds of miles of border wall to allow illegals to waltz across by the millions because they’re eager to replace white people as voters. Allowing refugees to seek asylum – whether it be from poverty, the effects of climate change, or fear of persecution – is a virtue America is built upon.

When he’s not fear-mongering about the vaccines or masks being attempts by the “socialist” Joe Biden administration to exert authoritarian control over America, he’s reminding the rubes how anti-American the left is, and how immigration is replacing the white race to create millions of new voters for the Democrats – a white replacement conspiracy theory – to claiming that BLM is fomenting a race war every time they protest police violence – Tucker is there to assure his audience that it’s black and brown people who are the actual racists, and the drooling 50 I.Q. rubes who watch him, are the real victims.

It’s a tried and true tactic conservatives have been using for decades. If you can’t see that the Democrats are conspiring to import millions of foreign illegal voters to add to their voting rolls to replace you, the white voter, and if you dare accuse conservatives of being racist for believing that… well, then , you’re the racist. And your only response is to short-circuit the conversation with false accusations of racism.

Joy Reid may have her own issues, but when it comes to race and conspiracy baiting, there is no comparison between the two. Tucker Carlson metaphorically wears a white hood. If someone offered him an actual white hood,  I have no doubt he wouldn’t hesitate to put it on.