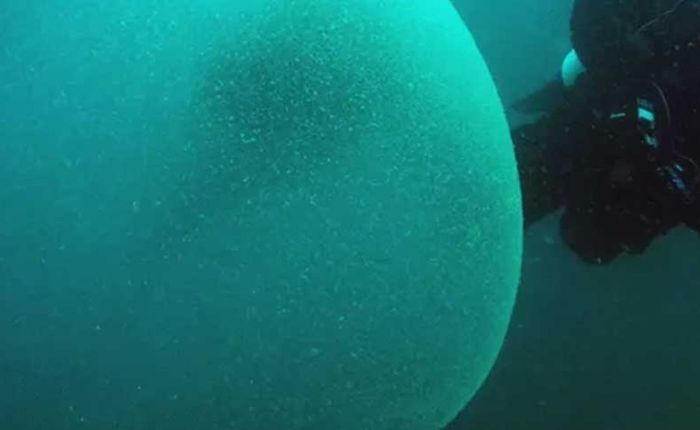 Since 1985 divers around Norway and the Mediterranean Sea have been reporting seeing strange floating blobs of gelatinous masses of mysterious goo. Until now, no one really knew what they were.

In 2017, one such orb, or blob, was sighted off the western coast of Norway. It was reported to be about 3 feet in diameter, and hovered in the water between the surface and the bottom of the seafloor. The orb had a dark streak cutting through the center, but the strange object was translucent and without any distinguishable features.

At the time of its sighting, these mysterious blobs have had scientists baffled.

“It’s a mystery, actually,” said Michael Vecchione, an invertebrate zoologist at the Smithsonian Institute who has been corresponding with Norwegian researchers about the blobs. “It could be an egg mass, or something completely different, but we just don’t know at this point until we get more detailed observations.”

Since the first reported sighting in 1985, divers have encountered approximately one hundred of the strange floating blobs. Until recently, they have eluded classification. But now, after a year-long citizen science campaign and a DNA analysis of material taken from the objects, researchers have now been able to identify them as the rarely-seen egg sacs of a squid called Illex coindetii.

According to a study recently published in Scientific Report each blob can contain thousands of tiny squids encased in a mass of disintegrating mucous.

Scientists have known about the species Illex coindetii for nearly two hundred years, but it is the first time they have identified and observed the squids egg sacs in the wild, the researchers wrote.