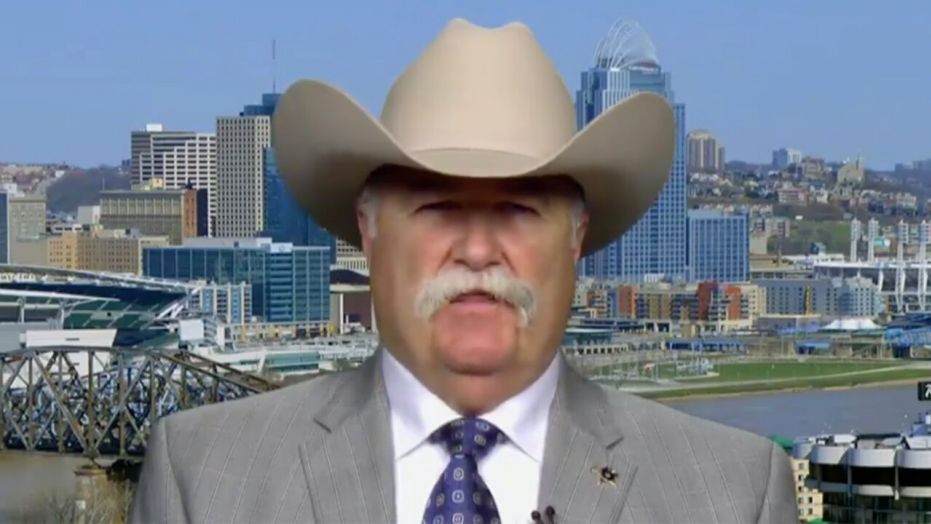 Tough talking Butler County, Ohio, sheriff, Richard Jones – AKA Billy Bob Doofus – appeared recently on Fox News to threaten anyone who doesn’t vote for America’s Greatest President, Saint Donald The Divine, offering to buy them a ticket to the country of their choice.

“It’s that time of election year again,” Billy Bob wrote on his Facebook page. “Celebrities threatening to leave the United States if the President is re-elected. This happened in 2016 and it is believed not one celebrity left then and it appears the same threats are being made this election year. Sheriff Jones would like to extend  an invitation to put money towards a one-way ticket for any celebrity that would like to leave the country this time around if President Trump is re-elected. I’ll even help hem pack.”

It’s apparent we’re dealing with a deep thinker here. An intellectual who thinks before he speaks.

“IF YOU THINK ABOUT COMING TO BUTLER COUNTY TO ABUSE POLICE, THINK AGAIN.

Butler County sheriff Richard K. Jones states he’s seen lawlessness in the country over the last few months directed towards police. The sheriff has seen water dumped on police in New York, bricks and frozen water bottles thrown at police as we’re officers blinded by lasers in Portland, Oregon. In addition. police have been shot at in Chicago and across the country.

“I won’t tolerate it, period. You shoot at police, expect us to shoot back. I will not allow my deputies or any law enforcement officer in Butler County to take the abuse I have seen over the last several months. If you come to this country expecting a free pass to harm one of my men or women in uniform, keep in mind, nothing is free.”

Is Billy Bob concerned about the rampant lawlessness and corruption of law enforcement?

Was Billy Bob outraged when Jacob Blake was shot six times in the back for being guilty of walking away from a law enforcement officer?

Was Billy Bob outraged when Breonna Taylor was murdered by corrupt police officers who lied to obtain a no-knock warrant?

Was Billy Bob outraged when George Floyd lost his life due to the deliberate negligence of a corrupt police officer?

And that’s why hundreds of thousands world-wide marched in protest.

In The News: Biden Administration Buying Millions Of Doses Of Pfizer Vaccine To Distribute To The World

In The News: Joe Manchin Says He Will Vote Against ‘For The People Act’

In The News: President Biden Pushes Renewed Effort To Vaccinate 70% Of Americans