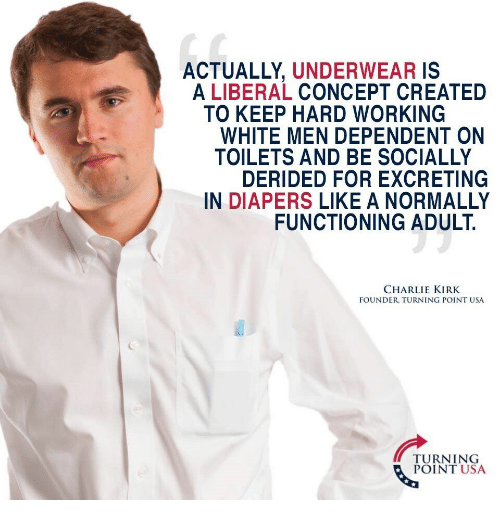 Charlie Kirk , 25 , is the founder of Turning Point USA , or Toilet Paper USA ( as some have referred to it ) , the conservative organization that seeks to fight liberal bias on college campuses , more often than not , by making s**t up , and playing the victim.

The organization is well known for it’s protests on college campuses across America , falsely targeting left wing students and professors as Marxists and placing them on watch lists.

In 2017 , diaper wearing members participated in a protest on the campus of Kent State University. The purpose of the protest was to prove that liberals are the real crybabies and snowflakes. How that makes any sense , is anyone’s guess. The protest back fired and the group was torched mercilessly on social media.

The group’s former president and campus coordinator , Kaitlin Bennett , seemed to be the only one who had enough sense to be embarrassed by the whole debacle , and subsequently resigned. These days she spends much of her time embarrassing herself on twitter with asinine tweets , insulting anyone whom she perceives as left wing , and showing up at left wing protests just to intimidate liberals with her AR-10.

Unlike Bennett , and others at TPUSA , Kirk has continued to wear diapers , believing it to be the best way to own the libs. He has even written a book about his diaper wearing adventures , Wear A Diaper , Own A Lib : How I Own Liberals Everyday By Wearing Pampers Pure Brand And Other Diapers.

Kirk owned the libs in spectacular fashion at last year’s Politicon event when his pants fell down during a heated debate with the Young Turk’s Hasan Piker , revealing his favorite choice of diapers – Pampers.

Procter & Gamble , which owns the brand , among many other products , chose Kirk to be its new spokesman for 2019 , replacing last year’s spokesperson , Chrissy Teigen.

“We chose Charlie as the new spokesman of our brand , because he’s the perfect example why adults like him should be wearing diapers ,” Ariel Schmaltz , a representative for P&G told the Journal. “He’s not afraid to admit that he wears diapers , specifically Pampers , even when the libs make fun of him. It takes guts to admit you wear diapers , and not adult diapers , and for that we’re grateful. We hope to have a long and fruitful relationship with Charlie for years to come.”

Kirk stands to make 2.5 million from his endorsement , which will include commercial ads on national television , and appearances on national radio to promote his new book.

“I’m proud to wear Pampers. I think they’re the best brand on the market. They’re soft , and plush , and water proof. There’s no other brand like them on the market , and believe me , I’ve tried other brands. I especially like their special limited print editions. The cars and argyle designs are fine , but personally I prefer the giraffe design because they remind me of my favorite pair of jammies I had when I was a little boy. In fact , I’m wearing them now. I usually wear a size seven because they’re more comfy , and don’t chafe my delicate little bottom , and I like the fact that they’re made without harsh chemicals , which is also great for my delicate little bottom.

“My father wore Pampers , and my mother wore Pampers. It’s a tradition I’m proud to carry on , and I will continue wearing them for as long as P&G allows me to be their spokesman.

“I know that libs think it’s funny for a grown man to be wearing diapers to own them , but they can laugh all they want. The fact is , whether libs want to admit it or not , I am owning them. And I’m also laughing – all the way to bank!”