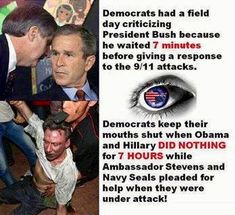 George Bush was given a CIA intelligence briefing that Bin Ladin would most likely soon attack the U.S.. He ignored it , and as a result , 9/11 happened. It’s amazing to me that Bush apologists like Rudy Giuliani are willing to ignore his incompetence , absolve him of any responsibility , and shamelessly claim that he kept America safe. Never mind 9/11 , the Iraq and Afghanistan wars , the numerous domestic terrorist attacks , and the multiple embassy/consulate attacks that occurred during his watch ; none of them count in their twisted logic. But Benghazi is worse than any of them because … something.

Democrats didn’t politicize 9/11. Democrats and Republicans united , because America was attacked. Too bad Republicans and Conservatives couldn’t do the same after Benghazi. All they cared about was using it as a means of discrediting a president they hated , so they created a conspiracy around it , including the bullshit claim that he allowed it to happen.