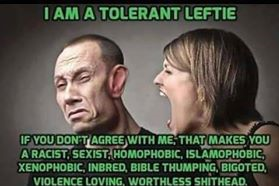 In the minds of liberal hating Conservatives , if liberals don’t agree with their bigotry , then it’s actually liberals who are the intolerant ones. They flip reality on its head. They don’t see their intolerance to gay marriage as intolerance. Anyone who disagrees with them is intolerant , and a bigot. To them , it’s not bigotry , it really has to do with ‘religious freedom’. You can’t get married to the person you love if it happens to be another man , or another woman ,  ‘because ( insert red neck southern accent ) it’s against my religion. God said Adam and Eve , not Adam and Steve. If we allow gay people to get married , and bake wedding cakes for ’em, then it’s my religious freedom that’s being violated.

‘Those damn liberals  are so intolerant!’