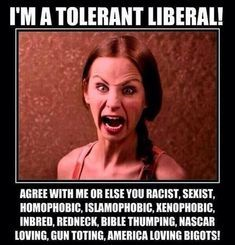 Yeah ,  them Democrats and them God damn liberals are so full of hate and intolerance. They’re determined to take away our freedoms and liberties. Just look at what they’ve done these last eight years , obstructing health care reform , attempting to restrict abortion rights , producing bogus tapes of reputable organizations like Planned Parenthood , and ACORN , destroying people’s lives , reputations and jobs , attempting to defund PP based on lies , actually succeeding in destroying ACORN  ; spreading fear and hatred for a president who was going to invade Texas , and “take away their first amendment rights”; spreading fear and intolerance of Muslims and gay people , calling down the wrath of God over same-sex marriage ; calling a president a socialist dictator over “Obama Care”; supporting and hiding behind “religious freedom” laws to justify their bigotry and intolerance , all the while whining that they are the real victims of intolerance. 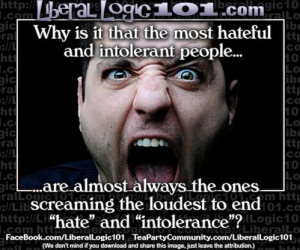 Wait … isn’t that what Conservatives have been doing? But still , they are hateful and intolerant because they criticize Conservatives and disagree with them. How dare they!

Conservative reasoning : when a Conservative criticizes anyone , it’s free speech. When a liberal criticizes a Conservative , it’s intolerance , and an attack on their right to free speech.  A perfect example of this hypocrisy was the Phil Robertson brouhaha. Robertson was not fired , but suspended , and yet his defenders bitched and moaned to no end about liberal intolerance. But when Martin Bashir made a nasty comment about Sarah Palin regarding her defense of Robertson , her supporters called for his head , and he lost his job.