Dallas – Stu Burguiere , employed at the Blaze Network , which is owned by Glenn Beck , has admitted to having sex reassignment surgery when he was younger. The co-host of the Pat And Stu Show  , and the host of The Wonderful World Of Stu , also seen on the network , says he did not intend for it to become public knowledge , until during  a recent episode of The Glenn Beck Show in which he portrayed the girlfriend of George Soros in full drag.

“As a kid , I often wondered what it would be like to be a girl ,” he revealed to Megan Kelly on a recent episode of The Kelly File. “The girls in school always smelled so sweat , like flowers or candy , and the boys always smelled like armpits. I know it sounds weird ,” he continued laughing , “but I know I can’t be the only guy who’s ever thought about it. But , anyway , even though I think I was the only guy in my school who didn’t smell like an armpit , because I was always so meticulous when it came to personal hygiene , I never had any success with the girls. I was small for my age , and sometimes I even thought that I looked like a girl. So , one day , I was twelve at the time , I borrowed one of my mother’s two wigs , and one of my sister’s blouses and pair of pants that she seldom wore anymore. I had to sneak them out of the house in my book bag. During recess I had to put them on in a stall in the boys’ room and sneak out without anyone seeing me.

“I remember walking around the school yard , mingling with the girls , watching them Jumping rope and playing dodge ball. No one recognized me. No one knew who I really was. No one knew that I was Stu Burguiere dressed up as a girl. After a while , some of the girls asked if I was a new student because they had never seen me – the girl I was pretending to be – and I said yes. I even joined them , playing dodge ball. I liked it. Not the game. I liked being a girl. There was no sudden revelation that I knew I was born to be a girl or anything. I just knew from that moment that I wanted to be a girl. I liked dressing like a girl and smelling like a girl. I did it every day for a week , and the more I did it , the more I liked it , even though I was risking getting caught , but somehow managed not to.

“But since I was a kid , there was nothing I could do about it , other than dressing up like one and pretending to be one. I had to wait until I was much older , until I was able to save up enough for the procedure , operation , whatever. This was before I started working for Glenn. I’ve never told any of this to anyone but my wife. The reason I’m here telling everyone my story now , is I don’t want to keep it a secret anymore. We were doing a segment on the Glenn Beck Show one day where I was pretending to be George Soro’s girlfriend , and it was then that I decided I had to tell everyone the truth. The guy you see now , Stu Burguiere , is just a character that I do every day on television and radio. My name is now Sue , and I’m happier than I’ve ever been in my life.”

“I’m shocked!” Glenn Beck said when he found out. “I’m totally shocked! I might wind up crying about this like I cry about everything else. Who knew Stu was really Sue! Not me , that’s who!”

“Wow! Stu is really Sue!” Dana Loesch of The Dana Show , said with a grin. “I’m surprised , but I can’t say I’m shocked. I always suspected there was something kind of creepy about him/ her , something not quite right with that dude – chick – whatever. He/she’s  not a pervert is he/she? He /she’s not going to hit on me or anything, is he/she? That would really be creepy!” 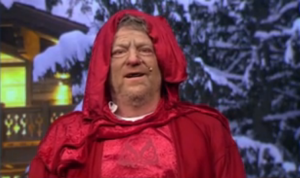 No one was more surprised and shocked than Pat Gray , Stu’s/Sue’s – best friend of many years.  “I never imagined in a million years that this would ever happen to someone like Stu – I mean Sue. He’s – she’s – the last dude – chick , whatever – I thought would ever do something like this. But I can’t say I really blame him -or her. I’ve always wondered what it would be like to be a girl too. And , no , I’m not a pervert. I just hope he /she  doesn’t hit on me either. I’m married. But he/ she is kind of cute as Sue Burguiere.”

Dan Bongino Accidently Craps His Pants On”Justice With Judge Jeanine” – Or Did He?