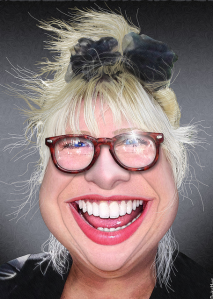 I grabbed Paul’s phone and called my other daughter , Scarlet.

“Scarlet! Obama’s president another four years and I can’t stop crying! America’s dead! What should I do?!”

“I can’t relax! Obama ‘s president another four years and I can’t stop crying , your father can’t stop farting , can’t get up because he’s apparently an old woman , and your grandmother and her old biddy friends are celebrating because Obama’s president another four years , and the world that we know is about to end because there’s a gay Muslim communist in the White House who hates America , Christians , the military – “

I paused to catch my breath , and cried even harder. “And wants to bring sharia law to the United States!”

I was crying so hard now , water literally gushed from my eyes like a fountain. I was literally wailing like a baby. I had been crying so hard and so long that I was covered in my own tears. My shirt was nearly soaked ; my nipples peaked through the fabric.

“Mom , get a hold of yourself!” Scarlet shouted over the phone.

“I said shut up , Paul!” I screamed at him. I threw his phone on the floor and stomped on it.

“Why don’t you both shut up!” Aubrey screamed from her bedroom. “You’re driving me crazy!”

“Don’t you take that tone of voice with me , missy!”

I threw myself on the sofa , sobbing like a baby. I was crying so much , I could barely see through the tears. Paul was moaning and pretending he couldn’t get up. He kept farting and farting. It stank so bad I wanted to barf all over him. I had to get out of the house before I suffocated , not just from Paul’s gas , but because I was crying so much and couldn’t stop. I thought getting some fresh air would help me feel better.

I grabbed my car keys and left the house.

“Shut up , Paul!” I screamed back , slamming the door shut.

I stood on the porch sucking in the cool evening air. But I didn’t feel any better. I still couldn’t stop crying. Tears continued flowing from my eyes. I knew that my mascarra was running just as much as my tears were. But I didn’t care.

I didn’t care about that either.

I took a short walk , before getting in my car. Lowering the windows to let in the cool air , I backed down the drive too fast , running down the mailbox. The porch like winked on and Scarlet appeared in the doorway.

Heading toward town , I tore down the road like a bat out of hell. As I reached the mall I saw something that made my blood run cold. The animals were out tonight. I should have expected it since it was election night.

A large crowd of Obama supporters stood in the road , men , women , and even children. More of them stood around the mall and the sidewalks. The ones in the road were blocking traffic. Some of them carried signs that were difficult to read in the fading light.

Someone shouted through a bull horn and they all began twerking as one , even the children.  They were thrusting and grinding obscenely , as Obama supporters are known to do. It was embarrassing and uncomfortable to witness. I watched a few moments , hoping they wouldn’t all start having sex with each other or molest the kids , because everyone knows Obama supporters are perverts and pedophiles. That would have not only been embarrassing , but disgusting.

They didn’t have sex with each other – or the kids – but what they did next , was just as totally unexpected. The ones in the street , about fifty or sixty , suddenly rushed the few cars , including my own , that were blaring their horns for them to get out-of-the-way. Some drivers were threatening to run them over. But nothing deterred the twerkers. Several of them jumped on the hoods and the roofs of the cars in front of me and began twerking immediately. When three of them jumped up onto the hood and the roof of my car , I panicked and pressed my foot against the accelerator momentarily , slamming into the back of the car in front of me.

The twerkers went flying from my car , screaming like the pansies they were. All Obama supporters are pansies.

The surrounding twerkers were momentarily stunned , staring at their fellow twerkers ,  probably wondering if I had killed them , which is what I had been thinking. I cried even harder , not just because Obama was president another four years , but because I might have killed a few of his supporters , even though I have always believed the world would be a better place without Obama supporters , even just a few. I was terrified of going to prison. How would my family handle it?

Feeling faint , as though I might pass out , I closed my eyes. Almost at once , a cheer went up from the crowds of twerkers. I opened my eyes to see what all the noise was , and the twerkers that had fallen of the hood of my car , were up and twerking as if nothing had happened!”

Thank God , I thought and this time I did pass out.