What is it about Barack Obama that drives Conservatives out of their minds with fear , paranoia , and hatred?

Is it that he’s a socialist? 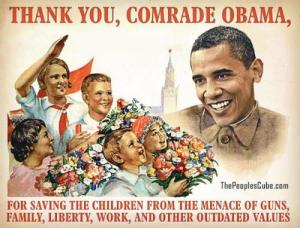 Is it that he is a communist/Nazi tyrant?

Over the years , Obama haters have had a laughable habit of comparing the president to Hitler , because of Obama Care – which is worse than slavery , according to Ben Carson – and executive action , which proves he’s destroying the constitution. Conservatives have also referred to Obama as a communist , with obvious radical ties to Bill Ayers , Saul Alinsky , and Frank Marshall Davis.
Ever since Sarah Palin accused Barack Obama of ‘paling around with terrorists’ , Republicans have had this image in their minds of the president as an eight year old running around with Ayers and his radical followers in the Weather Underground , planting explosives.
Again , no one has been able to prove he was ever connected to the Weather Underground. According to Fact check.org. , he barely knew Bill Ayers. But Conservatives are convinced that he is a America hating , radical terrorist. Just as they believe that he is a tyrannical dictator because of executive orders , which they claim , ‘are an unprecedented power grab.’ If that were true , wouldn’t that make every prior president a dictator?

Is it that he’s gay?

In 2008 , an obvious fraud named Larry Sinclair claimed that he had a drug filled , homosexual affair with the president years before he ran for the Senate , as an attempt to smear him , and destroy his campaign. But , of course , nothing was ever proven , and Sinclair himself never provided a single shred of evidence to back up his claims.
Conservative bloggers jumped on the ‘smear Obama’ band wagon , as well , publishing numerous made up articles. One such blog , World Nut Daily , which has a well-known reputation for publishing articles accusing black people and the president of racial division , and absurd conspiracy theories about Barack Obama ,  had a field day with the Sinclair non story , providing their brain-dead subscribers ( they also believe Michelle Obama is either gay , a transvestite , or a transgender ) with tons of mindless drivel.

Is it that he hates Christians and sides with Muslims?
For years Conservatives have crafted all manner of nonsense about the president. One of these is that he’s really a Muslim , who attended a radical Islamic school. In 2007 , as an obvious attempt to smear him , a chain email circulated on the internet , that the president attended a radical Islamic school for terrorists. Politifact rated the claim as pants on fire , and Fact check.org also found it to be false  .
Conservatives have also run wild with the absurd claim he is anti-Christian.  Whether it’s their fake war on Christmas nonsense ,  the false narratives that the Obama’s have banned military and federal officials from using or saying Merry Christmas , the banning of Christmas cards or trees at the White House or Veterans administration buildings , Fact check.org , Politifact , and Snopes have all found these claims to be false.
No matter how many times the lies and myths are debunked , the Conservative media continues to push this nonsense , and their gullible minions continue to swallow the Kool-aid.

Is it that he’s a racist?
Conservative Republicans claim that liberals , and Democrats are the real racists , along with Barack Obama who has single-handedly racially divided America. These claims are laughable , since there isn’t a shred of evidence that supports this. There is , however , a ton of evidence to prove that Republicans have been acting like racists. Since before president Obama entered the White House , Republican politicians and Conservative media have continuously played the race card to smear the president as a foreigner , a socialist , a communist , a Nazi , and a Muslim terrorist sympathizer.
Long before he entered the White House , the birther movement was under way , fueled by the race baiting lunacy of people like Orly Taitz , Jerome Corsi , Joseph Farah and many others. He’s been referred to as the food stamp president. When he made his infamous remarks regarding Trayvon Martin , a young black kid wearing a hoodie , who was stalked and murdered by George Zimmerman because he ‘looked like a thug’ , Republican heads exploded with righteous indignation , and the conservative media , and its minions and trolls on the internet , labeled the president , The Race Baiter In Chief.

To this day , Obama haters have continued to deny that racism has anything to do with their fear and paranoia of Americas first black president , so I’ve listed the following sources as a  reminder of just how absurd these claims are.
Republicans aren’t racist? Yeah , right.
I don’t hate Obama … I just hate his policies. Which ones?
He’s not really American.  “He’s a communist out to destroy America … Obama Care proves it.”
Obama is the real racist?  How so?
Is Obama a psychopath? Gina Bin Loudon is definitely a psychopath.
Race baiters who point fingers. Which is what racists do so well , by blaming others for their racism , and accusing others of racism for pointing out that racism is a problem.
Racists don’t like being called out for their racism. “Stop playing the race card …” “You can’t criticize Obama without being called a racist …”
Rightbloggers prove how racist they are. “Obama is the Racist In Chief …” “He hates white people …”
Smearing the president. “He’s a Muslim …” He’s gay …” “He’s a communist …” “A Nazi/communist tyrant … worse than Hitler … “Obama Care is worse than slavery …”
Racists lose their minds over Obama re-election. “Racism against blacks no longer exists in America. White people are the real victims of racism …”
A Townhall.com racist explains why Michelle Obama is a bitch. “I’m not racist … but … “
He’s a white culture hating racist … Even though he’s half white , he hates white people? Wouldn’t he be hating himself as well?
The Tea Party has absolutely nothing to do with racism … it’s a liberal conspiracy. I’m not convinced.
The Tea Party is not racist … it’s a liberal lie. Still not convinced.
“Obama incites racism , and violence.” Louie Gohmert Pyle is a babbling lunatic.

For eight years plus , Obama’s haters and critics have claimed that they are judging the president based on the content of his character , rather than the color of his skin and his name. But the evidence to the contrary is overwhelming.